Have Blooms, No Fruit! 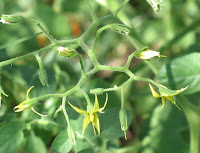 One of the questions that comes up each summer is why some plants bloom but don't set fruit.  You find it in tomatoes, chilies, peppers, squash, tomatillos and others.  There are a couple of things going on.  For plants like tomatoes, chilies, peppers and other related types, it is probably just the hot weather.  Once the temperatures reaches a certain point, the pollen loses its ability to pollinate the flower.  For tomatoes it is approximately 90°F.  For chiles and peppers it is a bit lower.  You may have noticed that if you plant early enough you might have fruit in the spring and then in the fall have another flush of fruit with not much going on in July and August.  That's because during the hottest days, the plant continues to bloom but the pollen gets sticky and can't move.  There is a product, Fruit Set, (I am not even sure it's available any longer) which is the hormone gibberellic acid, ( http://www.crfg.org/tidbits/gibberellic.html )  that will cause the flower to develop fruit without pollination and I have used it with some success, but have since decided it really isn't worth it.  You can help the plant along by giving it some shade to help lower the temperature although that is difficult to do if its 105°F outside.  One of the other methods is to go out early in the morning before the temps hit 90°F and give the plants a good shake.  Yes, just grab the stems and briskly rattle them.  This helps move the pollen.  I use this method and it does help.  The best thing is to hope it cools down a bit.
Cucumbers, squash and melons have both male and female flowers on the vine.  (see photos) The male flowers show up first.  The females show up when the weather is warm enough for them.  If all you see is male flowers you just have to have patience and wait for the female flowers. I have heard that by cutting the tip of the vine once it is over 10 feet or so long, encourages the plant to develop female flowers.  I do it occasionally on my gourd plants but it's not particularly a scientific experiment so not sure how effective it is.  Maybe someone will do a more rigid experiment sometime.
If you have female flowers but they are just shriveling on the vine it likely means that they are not getting pollinated.  If that is the case you can simply hand pollinate to improve fruit set. Then next year I would think about what I could plant to attract more pollinators.  The web site has information on hand pollinating.   http://vric.ucdavis.edu/pdf/FruitSetProblems.pdf
The lose of pollinators is getting to be a problem in some areas.  Honeybees have been particularly hard hit.  It isn't just the insects, it is also birds and bats that have been declining.  (http://archives.cnn.com/2000/NATURE/05/05/pollinators.peril/)By growing plants that serve as food and home to native bees and flies you provide them with the resources they need and in return they help pollinate your melons.  It is also important to not use broad spectrum insecticides.  They kill all insects including the ones you need.  The key to solving an insect problem is to target the problem and figure out how to solve that and not just spray everything.
Posted by Yavapai Gardener at 9:28 AM

Yavapai Gardener
Yavapai County, Arizona, United States
Arizona can be a harsh environment to garden in. It's also tough because there is so much variety in the geography of the state. In Yavapai County elevations vary from 3000 to 6000 feet. Definitely not a one-size-fits-all environment. We all share the hot summers, some hotter than others, water issues and a desire to garden.